Please join us in praying for change and transformation in our country and especially in our own hearts and minds as we confront the reality of the past, the challenges of the present and work towards God’s vision of racial harmony with hope for the future. We thank God for the gift of sisters and brothers from around the world who bring so much to us at Christ Church. May God help us to become more fully the rainbow people of God. Do pass your ideas on about how this might become more fully a reality.
Thank you gratefully
Simon

We are publishing a series of pen pictures each day celebrating the lives of people of colour on our Facebook pages. To follow them, why not subscribe to our page 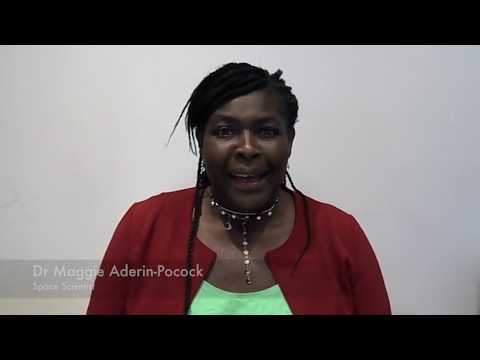 Today we celebrate the life of

Margaret Ebunoluwa Aderin-Pocock is a British Space Scientist and Science Educator. She is an Honorary Research Associate of University College London’s Department of Physics and Astronomy Since February 2014, she has co-presented the long-running astronomy television programme The Sky at Night with Chris Lintott.

Aderin-Pocock was born in London to Nigerian parents and was raised in Camden, London. She studied at Imperial College London, graduated with a B.Sc. in physics in 1990, and completed her PhD in mechanical engineering under the supervision of Hugh Spikes in 1994.

Aderin-Pocock has worked on many projects in private industry, academia, and in government. From 1996 to 1999 she worked at the Defence Evaluation and Research Agency, a branch of the UK Ministry of Defence. Initially, she worked as a systems scientist on aircraft missile warning systems, and from 1997 to 1999 she was a project manager developing hand-held instruments to detect landmines. In 1999, Aderin-Pocock returned to Imperial College on a fellowship from the Science and Technology Facilities Council to work with the group developing] a high-resolution spectrograph] for the Gemini telescope in Chile. The telescope examines and analyses starlight to improve understanding of distant stars.

Aderin-Pocock is committed to inspiring new generations of astronauts, engineers, and scientists and she has spoken to approximately 25,000 children, many of them at inner-city schools, telling them how and why she became a scientist, busting myths about careers, class, and gender. Through this Aderin-Pocock conducts “Tours of the Universe,” which she set up to engage children and adults around the world in the wonders of space. She also helps encourage the scientific endeavours of young people by being a celebrity judge at the National Science + Engineering Competition.

Aderin-Pocock was the scientific consultant for the 2009 mini-series Paradox and also appeared on Doctor Who Confidential. In February 2011 she presented Do We Really Need the Moon? on BBC Two. She also presented In Orbit: How Satellites Rule Our World on BBC Two on 26 March 2012.

Since 2006, Aderin-Pocock has served as a research fellow at UCL Department of Science and Technology Studies, supported by a Science in Society fellowship 2010-2013 funded by Science and Technology Facilities Council (STFC). She previously held two other fellowships related to science communication, including science and society fellowships 2006–08 Particle Physics and Astronomy Research Council (PPARC) and 2008–10 (STFC). Also in 2006, she was one of six “Women of Outstanding Achievement” winners with GetSET Women.

Aderin-Pocock was appointed a Member of the Order of the British Empire in the 2009 New Year Honours for services to science education. She also was awarded an honorary doctorate from Staffordshire University in 2009 for contributions to the field of science education.

Find out more great lives on our Facebook page