Christmas at the Community Centre 2017 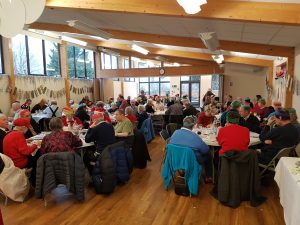 About eighty people who would otherwise have been on their own, were able to enjoy a Christmas lunch, a good singalong, listen to the Queen’ s speech and to take a present home on Christmas Day. This was the second year this event had been provided to local people, all due to the initiative of our Community Centre Manager, Chris Smith.

The day before, those of us volunteering, spent time wrapping presents, laying the tables, buying drinks and making the Community Centre as welcoming and festive as possible. Such care had been taken with the organisation of the event that everyone had their own place name and a list of what they had chosen to eat and a welcome drink when they arrived. 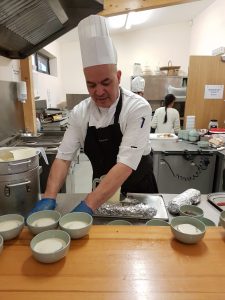 The chef said it was a great place to cook and everyone seemed to have enough to eat and drink.  David, who hosted the celebrations this year, did a sterling job keeping everything working well including the streaming of the Queen’s speech which provided somewhat difficult due to the technology.  People who came said how much it meant to them to them being with others and not being on their own.   Transport was provided for people who needed it. For the twenty plus volunteers who helped out on the day it was not only enjoyable but a moving experience. A number of people attending had disabilities and a few were homeless. Hearing life stories from the attenders, a number of whom were getting on for a 100 years old, was a very touching and memorable experience.  Thanks to Chris Smith for making this possible and such a success.